I am a Software Engineer and Interaction Designer.

Since December 2020, I am part of the Web Platform team at Igalia.

I am also contributing to the Chromium Web browser and collaborating with the University of Kyoto’s CSEAS as an affiliated researcher.

From 2015 to 2019, I worked at Terranet AB, a Swedish R&D company focused on proximity networks, designing and implementing innovative mobile software that took advantage of next-generation P2P connectivity.

From 2007 to 2014, I worked at Igalia, an expert consultancy specialised on Free SW, where I developed frameworks and applications for mobile and desktop. Igalia is internally organized as a workers’ cooperative and I did my part in the management and decision-making of the company.

Thesis: “Emergent IoT configurations for same-place collaboration”. Supervised by Jonas Lowgren within the Internet of Things and People research group, in collaboration with Terranet AB

MSc. Project: “Design and evaluation of an interface for finding and opening documents”. Graduated with distinction.

Since December 2020, I am part of the Web Platform team at Igalia.

I am a participant in the W3C Cascading Style Sheets (CSS) Working Group.

Since the beginning of 2020, I have been contributing to the Chromium Web browser. This is some of the work that I’ve done:

Making direct connectivity available to websites would enable them to create fast and convenient connections between users who are physically close, opening the door to new kinds of Web solutions. However, this would have to be done carefully to ensure privacy and security.

The nanjs proposal describes a draft JavaScript API for direct connectivity that balances usefulness and user safety by changing the conceptual model: instead of discovering and being discovered by every other node nearby, Web applications would register their interest in individual user sessions and would only be able to discover and connect to those. The goal is to make it easy to discover and connect to people who have allowed you to do so, and only to them.

Terranet AB is a Swedish R&D company specialised on next-generation proximity networks, which allow mobile devices to find and connect to each other in a quick and seamless way.

I worked on design and development across several layers of the stack. I developed a complex framework for Android that abstracts away the details of the underlying network technologies (WiFi Aware, WiFi Direct, Hotspot, WLAN…) and provides app developers with a reliable way to establish device-to-device connections.

On top of this framework, I built several demos and prototypes to communicate the usefulness of these network technologies. You can read more about this work in this blog post or hear me explain it in this talk at FOSDEM in Brussels. One of these apps came from the design that I created as part of my master thesis at the University of Malmö, you can read more about this prototype in this blog post.

For my master thesis, I designed and prototyped a solution to make presentations more flexible and collaborative. At the start of the meeting, attendees can join an ad-hoc mesh network just by tapping their phones together. Each slide selected by the presenter is shown simultaneously in the projector and the audience’s devices. There is a fluid workflow for requesting and handing over control of the projector, which encourages sharing and makes the interaction between presenter and audience more collaborative. One of my goals was to help the presenter take on the role of a moderator. This design was evaluated through group sessions and two live presentations using the prototype.

There is an opportunity to discover rich interaction possibilities in the combination of small, modular IoT devices to create augmented spaces. 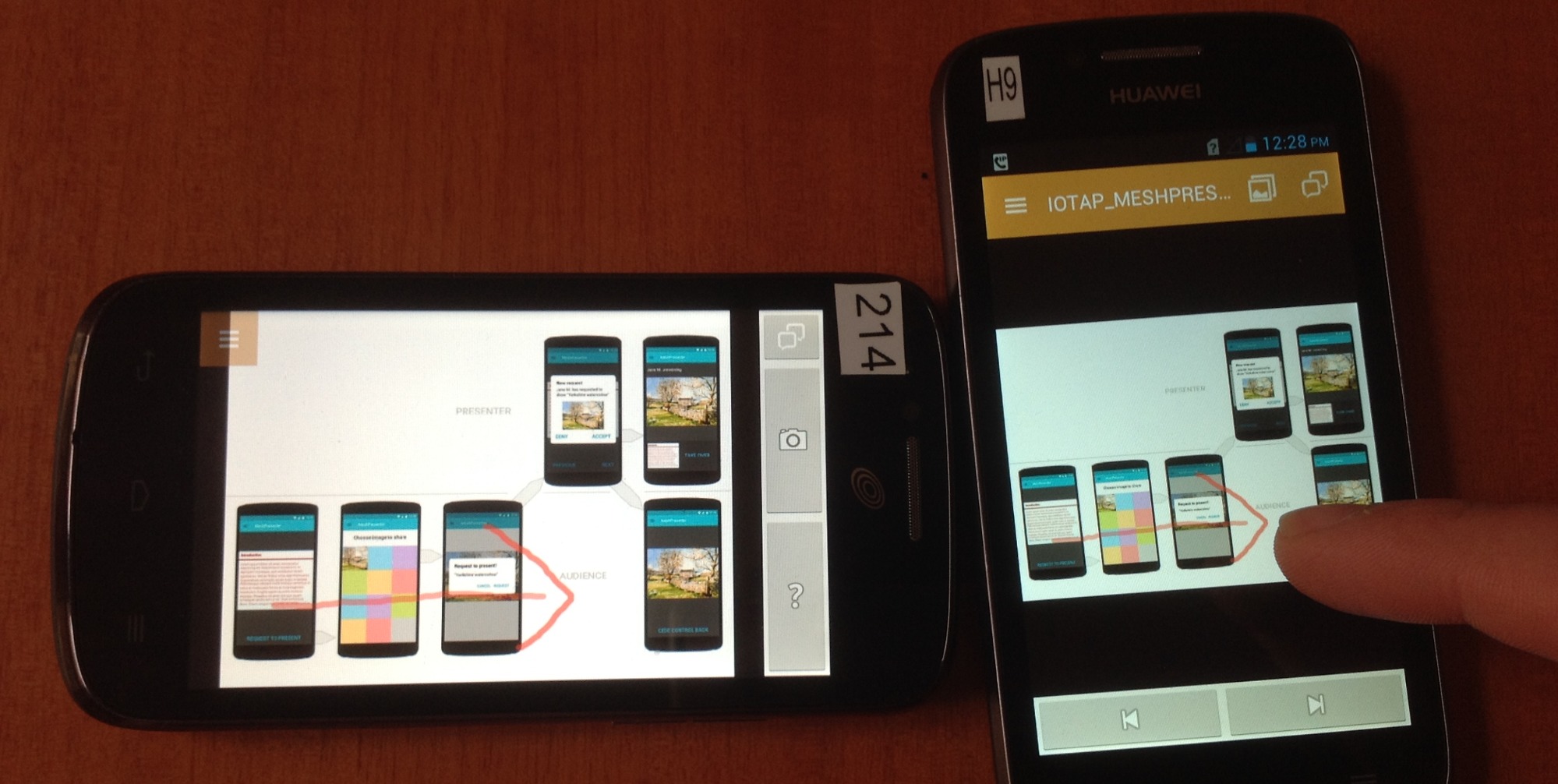 You can check this work at the Malmö university website or download one of the links below:

A group project developed under the brief “Archiving the intangible”. We explored opportunities for audience engagement and cross-generational communication through embodied interaction. An initial research phase used cultural probes to provide inspiration for design, asking participants to illustrate each other’s childhood stories.

With these insights, we created an interactive installation in the form of a large wooden machine with sensors and actuators that enabled many interaction possibilities, around which the audience collaborates to tell and illustrate a story.

The installation was surprising and engaging for participants. In this video, we demonstrate it to our coursemates and professors:

I took part in user research and ideation, and wrote the Arduino and OpenFrameworks code that powered it. The video below shows in more detail the OpenFrameworks program that employed a Kinect to turn the user’s movements into paint. 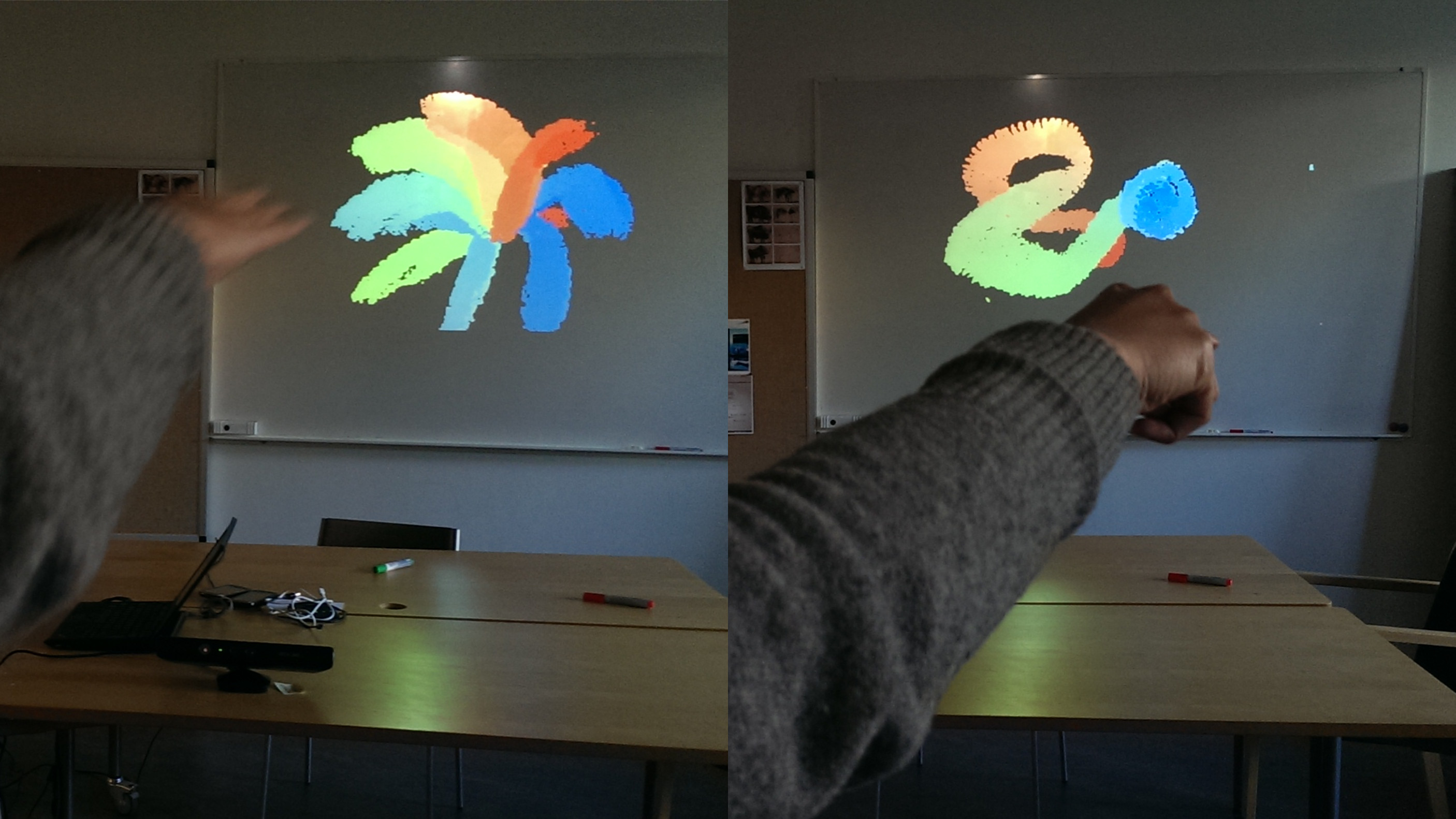 For over a year, I worked with Endless in adapting the GNOME desktop to make it suitable for embedded computers targeted at the developing world. This project had a strong focus on design and UX, not just to make it attractive, but to ensure that the solution was suited for the intended audience and context. 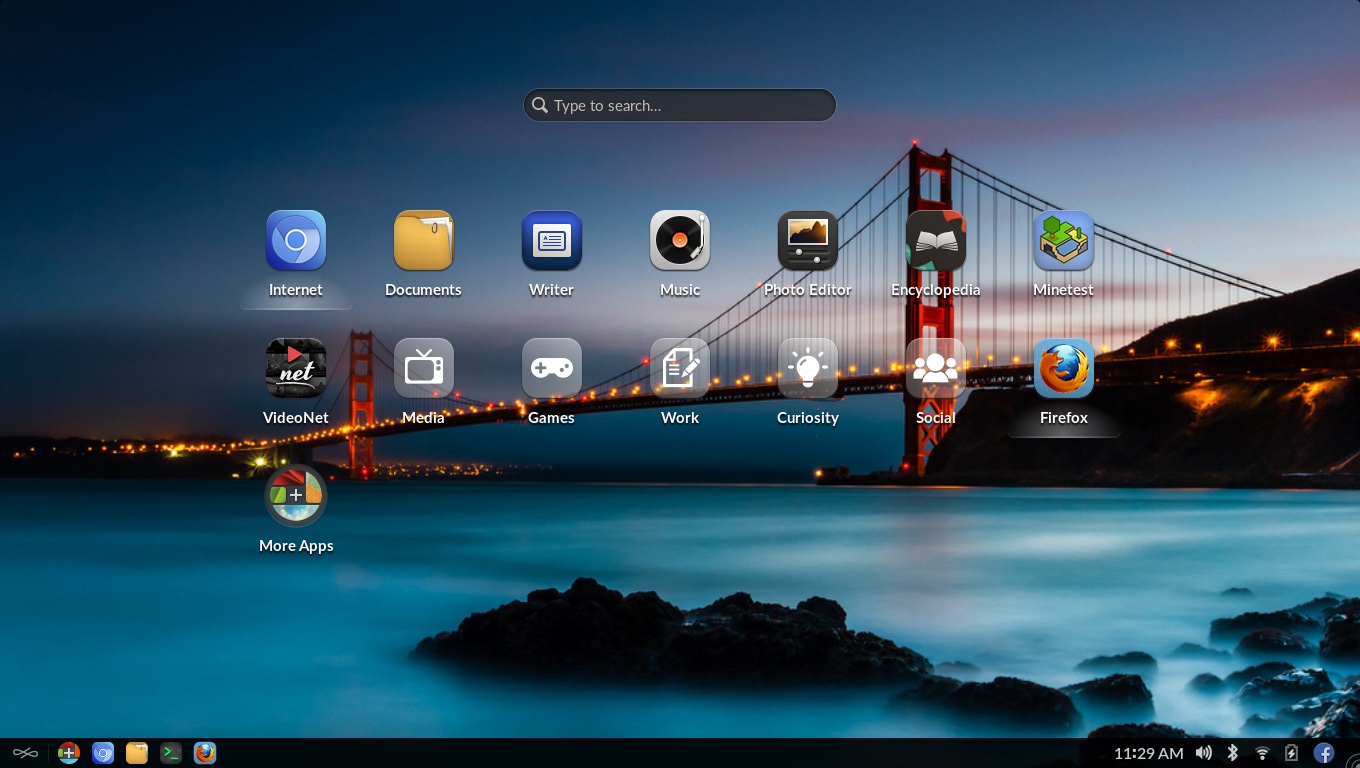 Interaction design and development for a multimedia mediacenter, to be integrated in TV and mobile Android devices. The application was capable of listing content from a expandable set of many different media sources. This project was carried out as part of a R&D consortium integrated by several Spanish companies.

The design had two main goals: create an information architecture that is clear and expandable, and make interactions simple and straightforward with the existing input methods (e.g. a TV remote). In our evaluation sessions, we displayed the attached materials on a TV while I narrated what was happening as the user navigated the application.

I also took part in the development of the Android application. Later on, I redesigned the concept to make it suitable for smartphones.

In my community work, I had a special focus on the design of Web browsers,a topic of strategic relevance for my former company. I carried out research and concept development in a series of blog posts:

Based on this, I then created an interactive prototype to test some of these concepts, and also to make a case for trying out and sharing more design ideas in the Free SW community. This work was the basis for two talks on “Sketching interactions” at the international Free SW conferences GUADEC 2012 and FOSDEM 2013.

Additionally, I have also contributed concept proposals and other work:

MeeGo was the operating system that powered the Nokia N9. It was based on GNU/Linux, with a user interface developed in Qt.

I took part for one year in the development of the MeeGoTouch widget library and associated theme, which was used to develop all the first-party applications in the N9. This work included QA, internationalisation, automatic testing and bug fixing. It provided me with a good base on the concepts behind the creation of attractive and responsive touch interfaces, down to the smallest details. 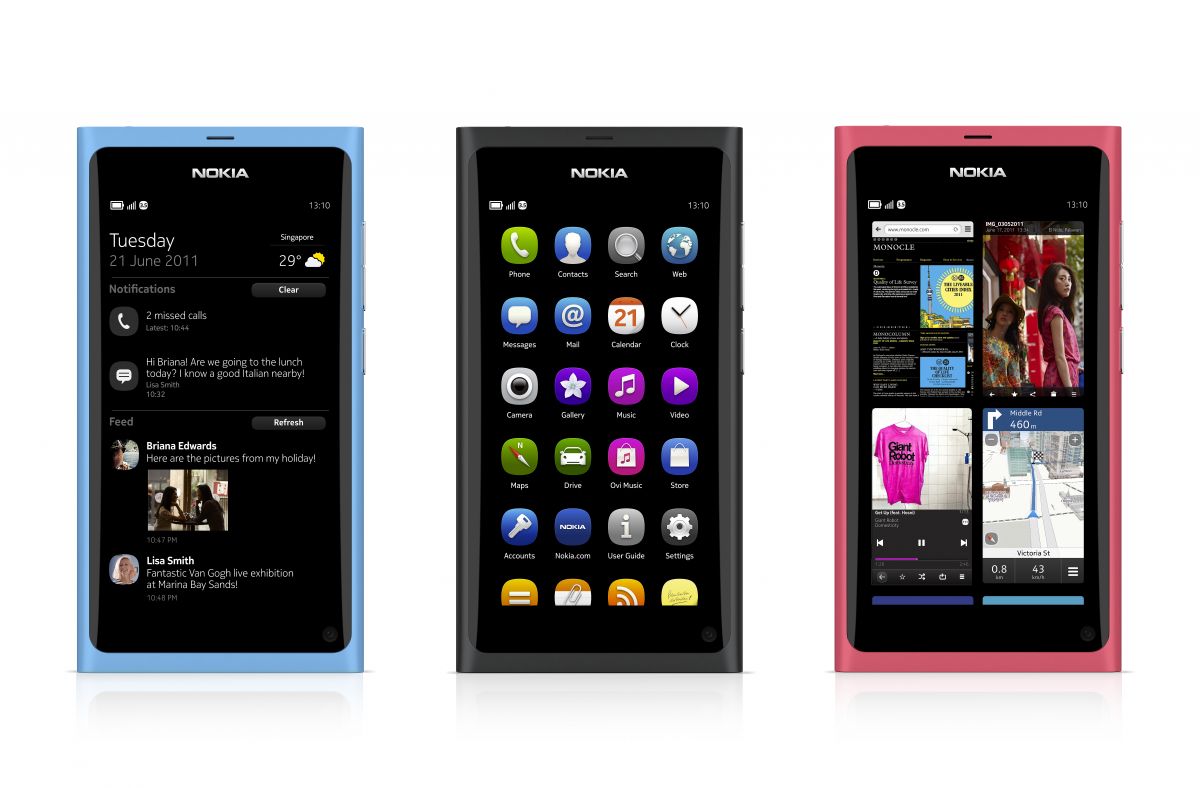 HCI MSc. Project: “Design and evaluation of an interface for finding and opening documents” (2010)

For my MSc. Project at the University of York I designed an interface to better match document retrieval with the way human memory works. I focused on the file-opening dialog as a point of contact between the personal archive and the current activity.

Two behavioural prototypes were developed and evaluated. These allowed users to specify files by combinations of characteristics aligned with those which are most important in people’s semantic and episodic memory. The UI was based on one big list containing all the possible files in the user’s collection that the current application can open. The user can browse this list to find the desired document, optionally using filters and different sorting criteria. An overview of the current contents of the list offers a high-level view and eases browsing by providing shortcuts to any position. A preview pane after the list allows the user to confirm his selection before opening the document. 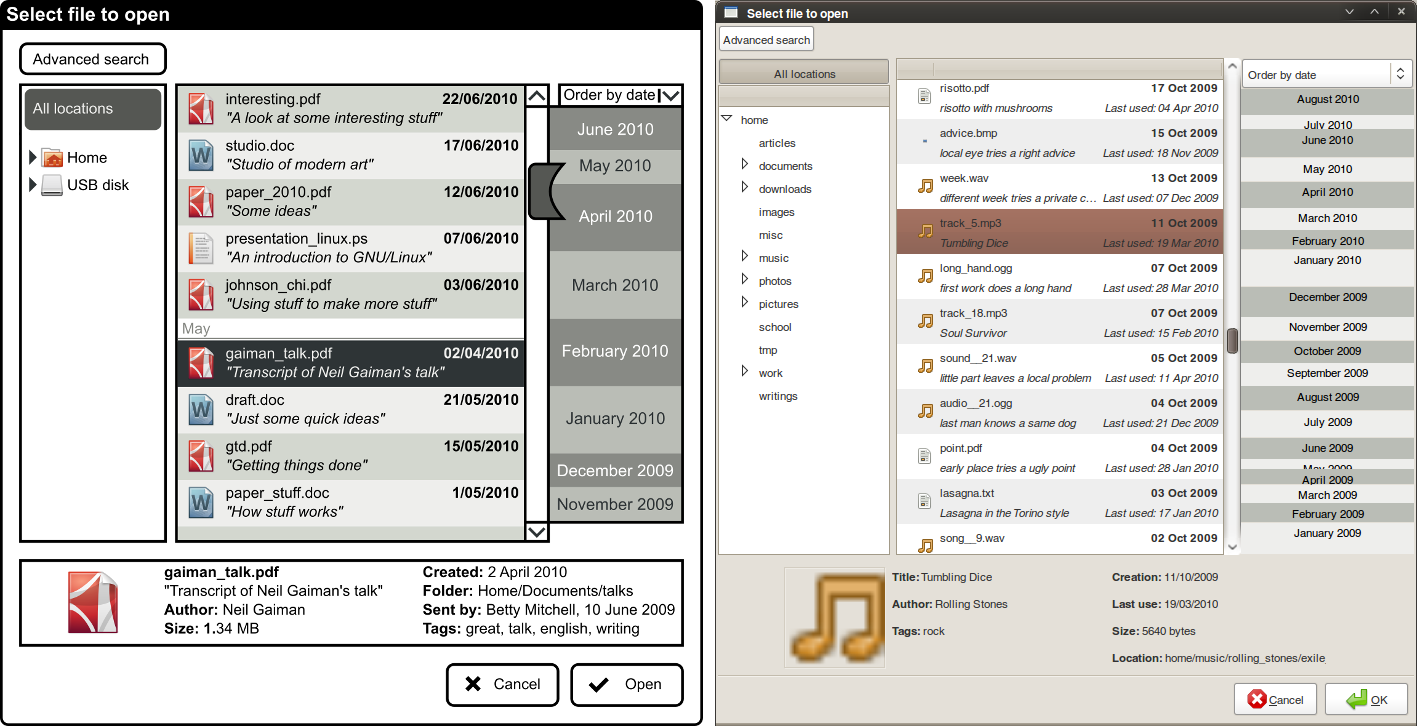 Maemo was the operating system for a range of Nokia tablets and phones: N800, N810, and N900. These were extremely innovative devices for their time, providing full computing capabilities and a fluid UI. In particular, Maemo was developed using desktop GNU/Linux technologies and the GTK+ widget toolkit. I worked on a range of projects for the core of the platform.

I was the main developer of the Hildon Input Method project for one year running up to the release of the N900 (2009). This was a set of libraries and utilities that managed text input on the Maemo platform. Among other features, I implemented word completion using the HW keyboard, an on-screen view to input special characters, a configuration applet, and several improvements to the on-screen keyboard. I worked closely with designers and testers, suggesting and prototyping improvements.

I took part in the development of the Hildon Application Manager (2008), a high-level tool for managing the installed packages in a Maemo system. It allowed the user to install and remove packages from the repositories, and seamlessly handled upgrades of the whole system. A main contribution towards the user’s experience was to minimise the impact of the limitations of the APT package management system.

I also worked on the Modest email client, the default music player, and others (2007). 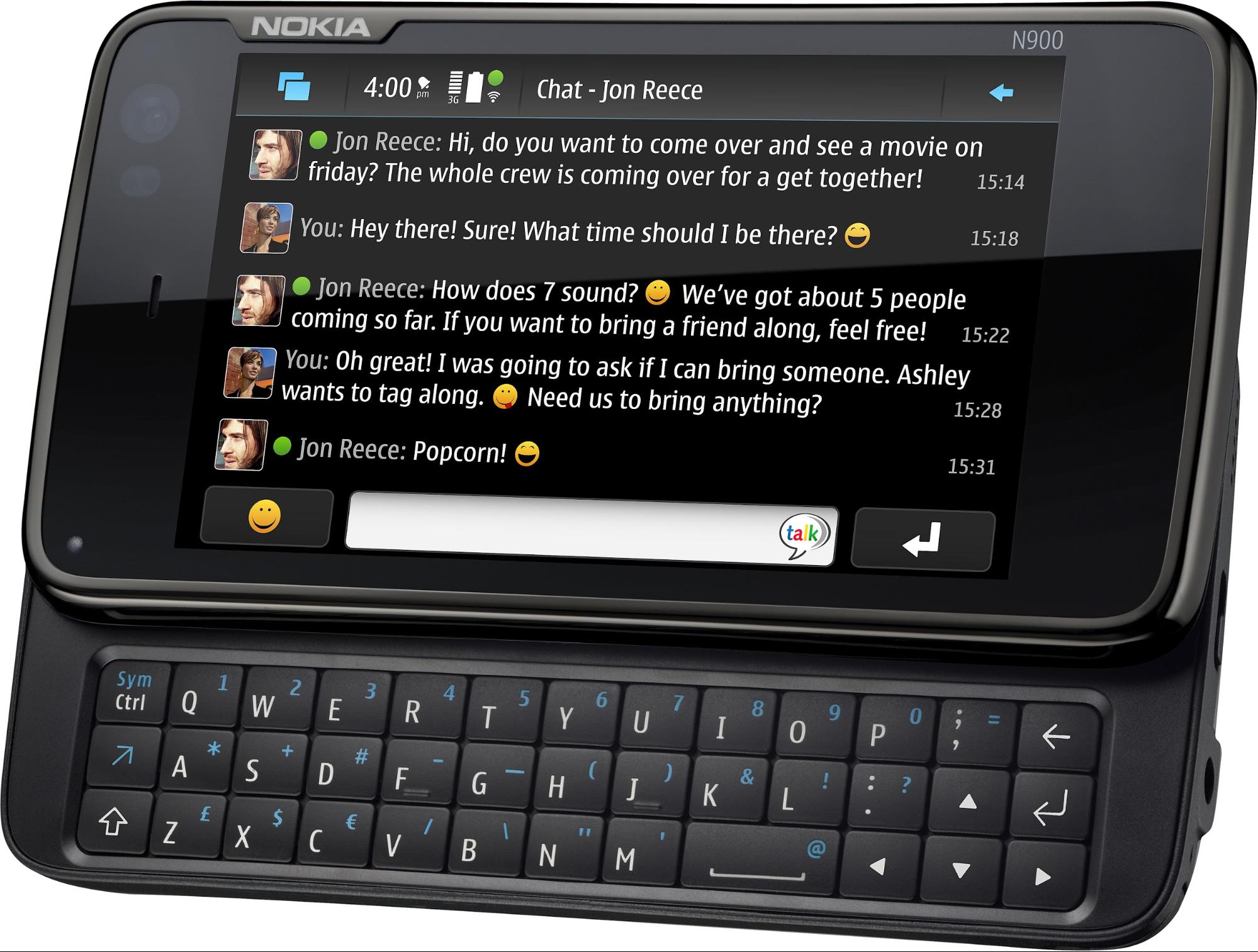